Shipping all over Australia

Fermented foods dates back to pre-historic times. Preservation of cabbage (Brassicca oleracea, var. capitata) with salt in earthen vessel was first described in first century A.D. by Plinius the Elder. Captain James Cook was awarded The Great Copley Medal for his observations and conclusions about sauerkraut as an effective food for the prevention of scurvy (most common form of death at sea) [1]. Process of fermentation originated in Indian sub-continent and knowledge of fermentation mentioned in the ancient Indian scriptures four Vedas, though skills of food preservation also mentioned in cultures such as Middle East, Central America and sub-Saharan Africa along with South Asia [2].

Cabbage has been used for general cure for illness in both Greek and Roman Gardens. Sauerkraut is a German term meaning ‘sauer – sour, kraut – cabbage’[3]. Sauerkraut is prepared by fermenting shredded cabbage in salt. Though Saurekraut is popularly known as a German fermented food but studies mentioned that it was originated 2300 years ago in ancient China and was brought to Germany in 1200s by the invading army of Genghis Khan. Germans loved the taste and the fact that pickling cabbage prevented it from spoilage [4].

Sauerkraut is digestible and appetiser thus often eaten as an adjunct to other foods and high in vitamin C. Fermented vegetables are good source of phyto-nutrients, fibers, flavonoids and probiotics. Fermentation is due to microbes in cabbage mainly by species Leuconostoc mesenteroitles, Leuconostoc citreum, Lactobacillus curvatus, Lactobacillus brevis and Lactobacillus plantarum [5]. Sauerkraut is a rich source of vitamins, minerals, beneficial bacteria, digestive enzymes, lactic acid and sulphur [6] and also, glucosinolates present in cabbage are transformed into ascorbigen during fermentation. Ascorbigen has anti-carcinogenic properties [7].

Cabbage is rich in amino acid glutamine, which is particularly good anti-inflammatory, but cooking reduces the amount of glutamine, thus sauerkraut is a great way to get this anti-inflammatory and immune booster glutamine. This is a gut-healing amino acid helps in maintaining the intestinal integrity, particularly helpful for people with ulcers, inflammatory bowel syndrome (IBS) and gastro esophageal reflux disorder (GERD) [8]. The sulfur containing compound sulforaphane has a good antioxidant property thus helps in ageing, prevents cancer, detoxification and reduces risk of cardiovascular disorders [9].

Time to relish the traditional delicacy………… 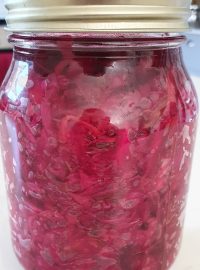